I adore working on regional roles, whether it be in the country or on the coast. It was no exception when we were recently invited to partner with Searoad Ferries for the newly created role of General Manager, Operations based in the beautiful town of Queenscliff on the Bellarine Peninsula.

Working with Searoad Ferries CEO, Matt McDonald, this exciting opportunity generated interest from a strong field of national and international candidates, largely due to the ongoing success of the Searoad Ferries organisation and the exciting growth journey it is travelling, but also because of the opportunity for a senior executive role located in such a beautiful location enabling a true lifestyle sea change.

We are pleased to announce Mr Wes Oswin has been appointed to this role. Wes will be leaving his current role of Manager, Marine Search and Rescue Office, Emergency Management Victoria to join Searoad in July this year.

Wes was born into a family of professional cray fisherman and has worked hands on performing all maintenance with the family cray fishing business operating in ‘The Rip’ and Bass Strait. Early in his career, Wes joined Victoria Police and spent ten years on the force including considerable time with the Water Police before moving into industry. Wes worked as Master with Port Phillip Sea Pilots and more recently has enjoyed a successful executive career in Government specialising in Marine with a particularly strong focus on Marine Safety – of which he is highly regarded for his expertise.

As well as his corporate career, Wes has also been an owner of a commercial vessel professional services company, as well as a partner in establishing a commercial diving business. In the short term, Wes will be commuting from his home in Macedon and living on his beautifully restored cray boat in the beautiful seaside town on Queenscliff. Eventually, Wes and his wife Sally will move to Queenscliff and be closer to Sally’s family. For now though, Sally will remain in Macedon whilst their kids finish their schooling.

Wes has a love of all things maritime and I’m sure will make a great contribution to Searoad Ferries and its future growth and success. Congratulations Wes. 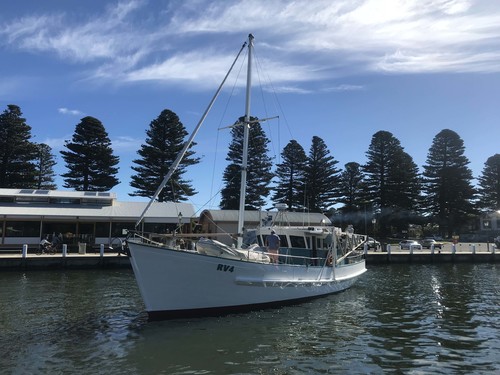 Above: Wes will be residing on his beautiful old cray boat in Queenscliff.